Central Serous Chorioretinopathy affects the macula, the part of the retina responsible for central vision. This disorder is characterized by fluid leakage from the choroidal circulation underneath the retina. The leakage occurs due to a defect in the retinal pigment epithelium (RPE), a single layer of tissue normally separating the retina and the choroid, allowing fluid from the choroid to accumulate under the retina.

It is currently believed that the choroidal circulation develops a pool of extracellular fluid or edema. This edema or leakage puts pressure on the RPE, causing it o blister up into focal or multifocal elevations known as serous detachments of the pigment epithelium. The blister develops an opening allowing fluid to leak under the retina. This leak is called “avascular” since it is not usually associated with the development of abnormal blood vessels (neovascularization), but this can occur as a secondary complication of central serous chorioretinopathy. 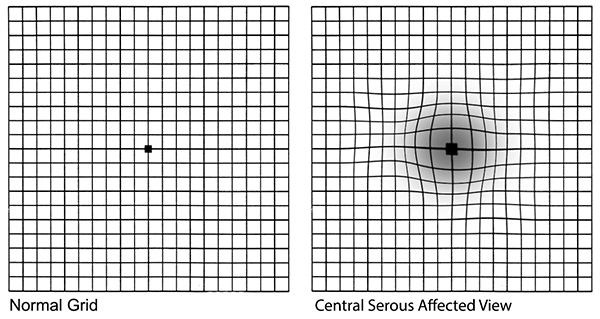 Central serous chorioretinopathy is more common among men between 25 and 45, although younger or older men or women can also develop the disease. It is associated with stress and steroid medication. While patients with central serous chorioretinopathy tend to be far-sighted and have an unusually thick choroid, they usually have no other eye diseases.

★★★★★ Very fortunate to have found this group

Very fortunate to have found this group but especially to have found such a skilled practitioner as Dr. Engelbert. The staff has always been courteous and helpful and the office is run very efficiently...right down to the soft jazz playing in the waiting area. Thank you all for your kind service.

Fortunately, with this disorder, spontaneous visual recovery generally occurs. The leak within the pigment epithelium usually closes by itself and the detachment resolves within weeks to months. Many patients have a vision of 20/30 or better in the affected eye. Although many patients may experience symptoms in the other eye, most do not. While vision is good, mild permanent visual abnormalities may develop including decreased contrast and night vision and distortion. It is possible that new detachments may develop weeks, months, or even years later. Each detachment can cause further damage to the retina and pigment epithelium and may require laser treatment. 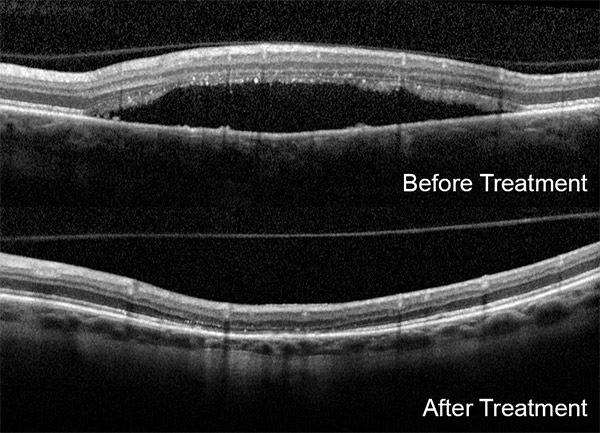 Most ophthalmologists recommend patients with the disorder change their behavioral patterns to become more mellow or relaxed in their daily life. The physicians of Vitreous-Retina-Macula Consultants have tried tranquilizers, antihistamines, non-steroid anti–inflammatory medications, and beta–blockers without success. If the detachment does not resolve on its own, or if it recurs hot or cold laser can be applied.

Updated on May 6, 2022 by Ophthalmologists & Retina Specialists of Vitreous Retina Macula Consultants of New York