Myopia is a process generally caused by excessive growth of the eye to the point where light rays are no longer focused on the retina, but instead are focused in front of the retina. In most myopes the eye grows normally in early childhood and then it expands to become myopic. It is difficult to explain exactly why this happens. When the eye expands it doesn’t necessarily grow in the sense, where more tissue is made, rather the amount of tissue in the eye stays the same – or even decreases – as the eye expands. Many layers in the eye appear to be stretched. Over the course of time these stressed tissues in the eye can decompensate. Many different unfavorable things can happen, and collectively these are often called “myopic degeneration”. Collectively these conditions are becoming very important causes of vision loss around the world. With development of modern society the proportion of people with myopia has greatly increased.

There are only a few risk factors commonly found for the development of myopia, but most center on spending more time indoors and close work when young. With the start of schooling for Eskimos the net refractive error went from being far-sighted to being near-sighted in one generation. Many countries in East Asia had agrarian economies and myopia was not common. With the economic development in these countries advancing the explosive growth in the proportion of eyes that are myopic is astounding. When the refractive error is greater than 6 diopters, the person is considered to have pathologic myopia.

In the United States the proportion of the population that is highly myopic is about 1 -2%. This proportion appears to be higher in large metropolitan areas. In Japan the proportion is 5 – 8%. In Taiwan nearly 40% of university students are highly myopic. Because of the various associated abnormalities, myopia is the second leading cause for vision loss in the world. Given the rapid increase in the proportion of people with myopia, it is likely to become the most important cause of vision loss in the world. The most important components of myopic degeneration are myopic macular schisis, myopic chorioretinal atrophy, and myopic choroidal neovascularization.

There are many other ocular conditions such as retinal detachment or glaucoma in which myopia is an important risk factor, however these conditions are not specifically related to myopia. All of these conditions, and more is covered in a new book, Pathologic Myopia by Drs. Richard F. Spaide, Kyoko Ohno-Matsui, and Lawrence Yannuzzi.

With the development of most forms of myopia the eye expands. The various layers of tissue in the eye appear to get stretched. Why they don’t grow is mysterious. In some patients the eye continues to expand into middle age. The outer part of the retina can continue to be in contact with the back part of the eye, but the inner part doesn’t necessarily want to stretch as much. So a force in placed on the retina, the outer part is pulled outward and the inner part won’t go. So the retina gets stretched through its thickness.

One way to look at the retina is using optical coherence tomography. This imaging method provides cross-sectional images of the retina. In myopic macular schisis the retina becomes much thicker and many cyst-like spaces of fluid accumulate in the retina. The visual function can decrease in myopic schisis. Additional events are not uncommon. The retina may eventually detach in the macular region.

A second dreaded complication is that a hole may form in the macula. There are some complex considerations that may lead doctors at VRM to suggest vitrectomy surgery to repair myopic macular schisis and its related problems. These considerations are beyond what can be easily explained in a short website article, but the doctors at VRM are world leaders in these issues.

Dr. Freund is a dedicated, compassionate doctor who goes above and beyond. Great medical office, wonderful and warm experience from start to finish. I am grateful to be under their care. 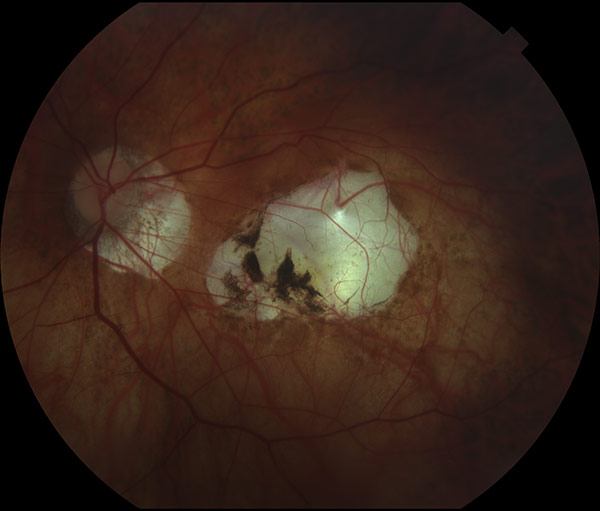 The eye stretches with the development of myopia. One layer that gets stretched is the choroid, a layer containing blood vessels in the back of the eye. Ordinarily the choroid gets thinner in everyone with age. Some elderly people have remarkable thinning of the choroid. In myopes the problem is compounded. The choroid is thinned in youth by the myopia and from then on gets thinner with age.

In some areas the choroid may become so thin and atrophic that it disappears entirely. This causes patches of tissue loss and these areas have very poor visual function. If the tissue loss affects the macula the patient may lose the ability to read, for instance. The loss of tissue can lead to other undesirable changes over time. Doctors at VRM discovered this abnormality in the choroid, but so far there is no known treatment.

In some patients with myopia, particularly pathologic myopia, new vessels may grow up from the choroid to be under the retina.

That doesn’t sound bad, but these newly growing vessels are incompetent. They frequently leak and bleed under the retina, both of which can be associated with scar tissue formation.

The new vessels are called neovascularization and since they arise from the choroid in myopes the process is called myopic choroidal neovascularization. These vessles are a leading cause of vision loss in pathologic myopes.

Cutting-Edge Diagnostics.Early detection of Myopic Degeneration is crucial in order to preserve vision and the quality of life. New technologies we are using at VRMNY allow for earlier detection and vision preservation in AMD patients.

Newest Treatments.As leading experts in the treatment of Myopic Degeneration, our retina doctors research and develop new diagnostic and therapeutic strategies. Many current concepts in diagnosing and treating Myopic Degeneration recognized worldwide were invented at the VRMNY. Doctors at VRM were among the first to discover and publish articles using drugs that blocked a key factor in myopic choroidal neovascularization, vascular endothelial growth factor. This treatment is now used world-wide.

Publications.In addition to publishing the standard textbook about pathologic myopia, the doctors at VRM have discovered many new aspects concerning the ocular effects of myopia as well as potential treatments. These articles can be found at the National Library of Medicine by clicking here.

World-class specialists.Our renowned retinal specialists lecture worldwide on Myopic Degeneration and serve as academic leaders in the field as the most published group in foremost peer-reviewed journals in the U.S.

Reputation.Our reputation for outstanding eye care gives you access to the latest treatments and technologies and the best eye doctors for Myopic Degeneration. Our specialists have been selected as Castle Connolly Top Doctors, New York Super Doctors, the prestigious group of New York Magazine Best Doctors, one of the best physicians in the United States by “The Best Doctors in America” and are consistently quoted by well-known retina specialists.

Updated on May 17, 2022 by Ophthalmologists & Retina Specialists of Vitreous Retina Macula Consultants of New York